A race discrimination case’s new developments were featured on the six o’clock evening news. For more information, you can view this breaking news story here. Ms. Oinonen was quoted stating:

“Race discrimination is a systemic issue facing African American educators all over Georgia who are being subjected to overt and explicit discrimination. In Dr. Madison’s case, he was threatened with lynching and was told that Board members were coming after his job after he spoke out against racial injustice in a positive affirming way. This is illegal for any employer to do against anyone, regardless of their race. Title VII Civil Rights Act of 1964 prohibits employers from discriminating and retaliating against those who speak out against discrimination.

The reality is that Dr. Madison was a well-loved educator who nobly served the school district for decades. He graduated from his hometown school district as a star football athlete and successfully worked his way up to school principal. In fact, a petition signed by numerous educators and employees who worked at that school was submitted to the administration in support of Dr. Madison. It wasn’t until he spoke out against racism that he first encountered retaliation by the District. And that is an illegal violation of the Title VII Civil Rights Act of 1964 which prohibits employers from discriminating and retaliating against workers in Georgia.

END_OF_DOCUMENT_TOKEN_TO_BE_REPLACED

Dr. Jackson Reynolds was retaliated against after she reported the abuse of her special needs students that had been captured on video.

Dr. Jackson was forced to report the abuse to Child Protective Services and the Atlanta Police Department all by herself. APS never questioned her about the matter until she was compelled to go on the six o clock news, Nancy Grace on CNN, and other news media. Soon after she was called in for questioning and was summarily terminated from her position.

END_OF_DOCUMENT_TOKEN_TO_BE_REPLACED

Good Georgia Education Lawyer represents Dr. Jackson Reynolds, an APS whistleblower and former special education teacher who rescued her severely autistic special needs students from child abuse after she uncovered that certain paraprofessional staff had been physically assaulting them. She uncovered the abuse after setting up video cameras in her classroom and immediately reported the abuse within the 24 hour requisite period.

Dr. Jackson Reynolds had been complaining about the paraprofessionals negligent behavior to her Principal all year long to no avail. She repeatedly complained (well documented in writing) that they refused to do their job and watched movies all day long on their laptops. She was threatened by her supervisor after she made an attempt to report it to central office downtown. Subsequently, in an effort to prove what was happening, she set up the video cameras. It was then that she discovered the horrific reality of what actually was occurring to the children behind her back: staff abused the children when she stepped outside of the classroom, behind the partition wall to attend to diaper changes, or they were outside her line of vision.

After reporting the abuse to APS, APS failed to properly investigate, not even formally questioning her as to what she had seen. Shortly after reporting the abuse, Dr. Jackson was horrified to learn that APS concluded the investigation without questioning her or reporting it to Child Protective Services, claiming they had found no evidence even though the only people they had interviewed were the two abusers and a non-verbal autistic victim.

END_OF_DOCUMENT_TOKEN_TO_BE_REPLACED 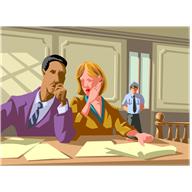 Student disciplinary tribunals are notoriously difficult to win, a recent study showing that 89 to 91 percent of students are found guilty and lose their tribunal hearing.

Good Georgia Education Lawyer has been very fortunate to have a solid track record of success, including this past week where she won a student disciplinary tribunal for her client who was facing expulsion or alternative school.

Ms. Oinonen and her clients were very gratified and the fairness and objectivity of the hearing officer who found her client to not be in violation of the code of conduct charges and determined that “no further action” was needed against him in terms of discipline. The student was permitted to return to school and make up his school work.

END_OF_DOCUMENT_TOKEN_TO_BE_REPLACED

Here is Gilda Day’s Response Brief in her case before the Georgia Court of Appeals. Many Floyd County Association of Educator members have wished to see it. For easier viewing, click on the brief and you can view it on the Scribd webpage:

Attached below is Gilda Day’s Appeals Brief before the Georgia Court of Appeals. You can click on it to get to the Scribd webpage for easy viewing:

Good Georgia Lawyer contends that this issue is part of the ongoing war on teachers and public education that is driving educators out of the profession and further destroying teacher morale. Each year, educators move to different parts of Georgia transferring to other school districts for any number of reasons such as professional career opportunities, financial, health, or family reasons. The plaintiffs in the lawsuit had to move due to very important family needs. They notified their principals and gave the earliest possible notice. Then they helped find new hires to replace their position, thus causing absolutely no financial loss to the School District.

The District bullied the teachers by threatening their teaching certification which all teachers need to keep in good standing in order to teach and maintain gainful employment to provide for their families. The District claimed that it was a sanctionable action by the PSC (the Professional Standards Commission, the regulatory body for teacher certification.) The trouble is that wasn’t true and the District knew it. Paul Shaw, Director of the PSC had already advised them that for teachers to resign prior to June 1st would not be considered a sanctionable violation of the code of ethics.

END_OF_DOCUMENT_TOKEN_TO_BE_REPLACED

Below is a copy of our contract:

The attack on public education and teachers is relentless and continues.

The source of these attacks come from the pro-charter corporate, big money anti-union movement that has swept the nation funded by hedge fund billionaires like the Koch Brothers, Bill Gates, the Waltons and more. Unfortunately both Democrats and Republicans have really drank the Kool-Aid on that one through Hollywood propaganda, Teach for America, and corporate lobby interests. It has especially been seen through Michelle Rhee (who is the former boss of the APS new Superintendent) and the movement to privatize public education by Board-TFA takeover. No political party has clean hands when it has come to buying into this propaganda. Sadly, slowly but surely teachers, parents, and communities are learning they have fallen prey to a giant bait and switch. Succumbed by promises of “local school governance” and “greater flexibility” they don’t realize what they’ve given up—necessary accountability and transparency which protects our students, teachers, and public schools—until it is too late.

The latest is the push is for districts to choose to become a charter system by June 2015. Charter advocates believe this is a good thing because it allows more flexibility. The problem is that it throws accountability out the window. Laws that regulate classroom size or teacher qualifications are good things not bad. Whether it is big banks that need regulation to protect consumers from subprime mortgage lending, or laws that protect kids from having oversized classrooms and unqualified teachers, rules are set in place to protect our schools and provide accountability.