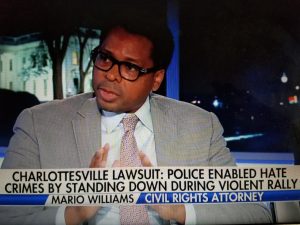 Mario Williams discusses a lawsuit against Charlottesville Police for ‘standing down’ and failing to intervene in the hate crimes committed in front of them during the white supremacist rally. Mario Williams is a founding law partner of Williams Oinonen LLC and chief of the civil rights division at Nexus Caridades Inc. In this recent television broadcast, Mr. Williams and Mr. Mike Donovan, President of Nexus Services Inc. discuss the lawsuit which was filed this past week on behalf of Robert Turner who was attacked by white supremacists who doused his eyes with mace and then beat him with a cane stick during the rally in front of the police.