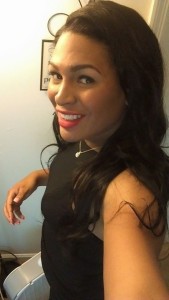 International musicians and entertainers Elton John and Michael Stipe have released a joint statement in support of our client Zahara Green (featured in the above photograph), in addition to all transgender prisoners in the state of Georgia, following harrowing reports about the way inmates have been treated there. “Transgender women in male prisons have an equal right to protection from violence and abuse in prison, yet they continue to face horrific injustices,” the duo wrote.

In it, they reference Ms. Zahara Green, our client whose story gained national spotlight when Buzzfeed reported that she – an inmate at a Georgia prison for men – had requested protection after being allegedly sexually assaulted but was then moved to a cell with the man she claimed had raped her.

An article in Rolling Stone magazine featured their statement which continues:

“The experiences of Ashley Diamond and Zahara Green cast a harsh light on the brutality, torture and horrible conditions inside Georgia prisons today,” John and Stipe wrote. “They are emblematic of the continued discrimination experienced by transgender inmates – who are 13 times more likely to be sexually assaulted while incarcerated.” They go on to say that most sexual assaults are not reported, because, they claim, members of the prison staff are often the perpetrators.

“This is outrageous, and the message it sends is horrific: that violence against and discrimination of trans people is not only allowed, but sanctioned,” the musicians wrote. “We applaud the U.S. Department of Justice for supporting Ashley Diamond and the trans community in arguing that Georgia’s policy of denying transgender inmates their medically necessary hormone treatment is unconstitutional.

“But we must do more to end the culture of violence and discrimination surrounding gender identity and expression,” they continued. “We urge the state of Georgia to embrace desperately needed changes to their correctional system.”

Michael Stipe and Elton John’s advocacy for Ms. Green is also featured in this New York Daily News Article and in Breitbart.