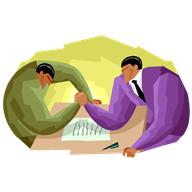 Good Georgia Lawyer recently just explained when a contract needs to be in writing to be enforceable.

Today’s article discusses when contractual agreements are enforceable without writing, for example, an oral agreement between two parties. When should this matter? Well, for one thing, in the event of a contract dispute, not having a contract in writing would certainly matter. Contractual disputes sometimes hinge on the meaning of a contract. One party says that they were promised by the other party to do something and the other party claims otherwise. This is why, as a general rule, it is always better to make sure you have a contract in writing.

But what if you don’t? One of the defenses to a breach of contract lawsuit lies in the statute of frauds defense as explained in the earlier article, some contracts need to be in writing to be enforceable.

Nevertheless, there are times where the statute of frauds defense does not apply and you don’t need the writing to prove that a contract does exists. The Official Code of Georgia § 13-5-31 explains that contracts don’t need to be in writing under the following conditions:

(1) When the contract has been fully executed: An example would be if I paid Uncle Bob $500.00 to paint my house. Uncle Bob receives a check for $500.00 that he promptly cashes and paints my house. Here, the contract has been fully executed and both parties have done what was promised. If I want to sue Uncle Bob later because I allege he did such a terrible job, I don’t need a written contract to prove that a contract indeed existed.

(2) Where there has been performance on one side, accepted by the other in accordance with the contract:: Under the same example, what if the performance above was merely one sided? I give Uncle Bob the $500 check which he promptly cashes. Unfortunately, Uncle Bob has fallen off the wagon and spends his days in the local watering house rather than painting my house. If I have to take Uncle Bob to court, can I prove there was a contract even though I didn’t put it in writing? Yes! According to Georgia law, there has been performance on one side (my payment of $500) accepted by Uncle Bob in accordance with the contract.

These are some very general examples to give you an idea of when contracts don’t need to be in writing under Official Code of Georgia § 13-5-31. Nevertheless, we hope by now you can tell that it is always a very good idea to make sure that contracts are in writing.

Because the law is so complex, it is also wise to have a good Georgia lawyer draft and/or review your contracts in order to insure that your legal rights and interests are protected. Contact Williams Oinonen LLC for more information.